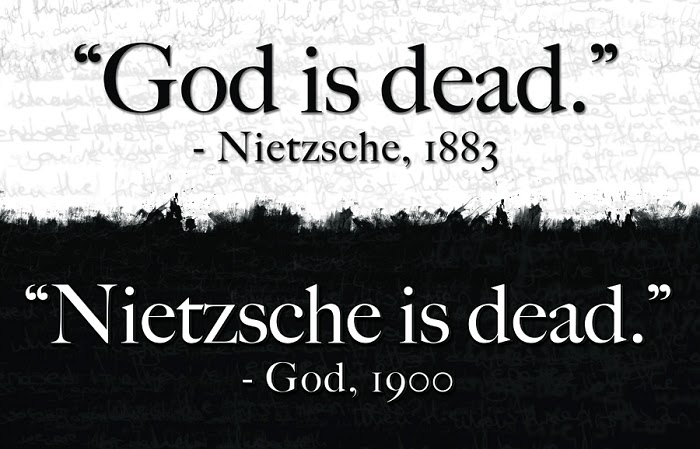 The picture above is the newest one on my facebook page.  I have had a number of pictures before that relate to my business.  I decided that it was time to put up a picture that related in a very obvious way to my faith.  There were many that I could have chosen from.  This one replaced a picture of Plato and Socrates.

Soon the inevitable happened.  Somebody wants to know what my picture means and I have nothing written to explain myself.  This is a good time to do just that.  I took a look at the profile of the questioner.  He is from Egypt.  I made the assumption that I was about to answer a Muslim but I used the same response I would have used for anyone.  Here it is:
“People have been living and speaking as if there is no God. Nietzsche even made the pronouncement that God is dead. Nietzsche died in 1900. God continues to now and will live forever. I believe that apart from the assumption that the God of the Bible exists we do not have the preconditions for knowledge in any field. We can ignore or mock him. We can pretend that we do not know of him and what he requires. That is all it is - pretending.”

I wanted to be very clear that I was not talking about just Theism – the idea that there is a God.  I wanted to be clear.  I hold that we must accept Christian Trinitarian Theism.  Anything less would be a denial of my God.  It turned out that the question was from a fellow believer.  It was good to be able to interact with Christians from other lands.  I thought I was about to have the opportunity to witness to a Muslim.  I guess that is for another day. In the meantime I think it is a good thing to have an answer ready.  I would like to do that in the context of chronicling my own experience in hopes that it might be helpful to others.

I grew up going to church – ok – churches, lots of them.  My family moved a good deal and so when I was done with high school I sat down on day and listed all of the schools I could remember.  I came up with 26.  The number of churches was greater because wherever we moved we had to try at least a couple if not a few to find which one my parents wanted to attend.

When you bounce around like I did it is a little bit difficult to learn much about school subjects and I think it was even harder to learn about the Christian faith.
I think what I knew of the faith by about the ninth grade was that there was a God.  I had been taught believers baptism, salvation by grace through faith, and everywhere I went they seemed to be preoccupied with the book of Revelation (the last of the 66 books that make up the Bible).

In the 8th grade I had been discipled (trained in the faith) by a bible college student who taught me to have devotions.  He answered my questions on a regular basis and taught my Sunday School, led a youth bible teaching ministry, and privately taught a group of young boys to have devotions.  I thank God for him and remember him in my prayers.

My family moved from there to Casper, Wyoming.  Here my faith was shaken to the core.  It was not the number of cultists I ran into.  I did run into just about everything from the classic staples of Mormons and JWs to the more esoteric Hara Krishna, Church of the Living Word, and The Way International.  These actually strengthened my faith by forcing me to the Bible to prove what I had been taught.

What really hit me was participating in a play in a literature class.  I was in “Barefoot in Athens”.  I was the second smartest man in town.  Socrates was the smartest.  His nick name for me was stupid.  He insisted on asking me questions.  He kept asking questions until It was shown that I really had no idea what I was talking about.

This self questioning was very disconcerting.  I made a mental wreck of myself.  I soon arrived at the place where I was not sure if there was an up or down, a left or right, or even if I actually existed.  You can imagine the mess that was being made of my world.  The technique brought me to a point of skepticism regarding nearly everything.  Nothing was sacred and all I was using was a simple questioning technique – not much different from a toddler who keeps asking…Why - I was a wreck!

I did not look that way to others.  They thought I was pretty smart.  I was the guy who could tie them in knots.  I even thought myself to be pretty sharp.  Yet I was alone with thoughts of despair.

When a person gets to a place like this they get very close to what the underlying ideas (presuppositions – ideas about the nature of reality that they take for the bedrock of what they believe) of how they view the world are.  I was no exception.

I was going through this crisis of faith as a Christian.  I was still attending church.  Thankfully the Lord sent me David Marlow.  David was a Christian student that I shared a few classes with.  I decided to demonstrate to David that there was no left or right.  He did something every believer should be able to do.  He opened his Bible and read this passage at the end of Stephen’s sermon:
Act 7:54-56  When they heard these things they were cut to the heart, and they gnashed at him with their teeth. But he, being full of the Holy Spirit, gazed into heaven and saw the glory of God, and Jesus standing at the right hand of God, and said, "Look! I see the heavens opened and the Son of Man standing at the right hand of God!"

He opened the scriptures and used them to demonstrate that the worldview I was espousing was not in accord with his standard – God’s infallible word.  He presented me with a choice.  I could continue to live with the doubt and skepticism I had been dealing with or I could recognize the truth of God revealed in the Bible.  You see, the passage he showed me demonstrated that there was a right and a left.

From my earliest years I had gone to church and been taught that the scriptures were true.  I had heard this at home.  This was what I believed.  I was a believer.  I had developed a way of thinking that was contrary to my most fundamental belief and David pointed it out.

I had a choice to make.   I could believe in a right and a left because God said so – or I could continue in my skepticism and doubt.   I could not do both.  I chose to believe God.

Now I had some real cognitive dissonance going on.  I still had a questioning spirit but I had learned to not turn it on my faith.  I began reading everything I could get my hands on regarding apologetics – the defense of the faith.  I assembled a good library and I read everything in it.  I began carrying my Bible with me to school and answering the questions of others.

God graciously kept those who had my questions from coming to me.  I really had a fear that they would find me and I would not know how to respond.  Although I had come to a tentative resolution I had no idea of how to present it to others.  I don’t think I could articulate what had actually happened other than to relate the story above.

I went to Western Bible College in 1979.  My theological understanding grew.  The upper classmen spoke often of what they were studying and I ended up buying their textbooks and talking to them.  In this way I was exposed to the writings of Francis Schaeffer.  I worked through his material and came to what was for me a dramatic revelation:  there was no sure foundation for thought unless I assumed the truth of God as explained in scripture.  Every other approach failed to supply the preconditions for knowledge.

This should not have been new to me.  I had read the book of Proverbs in the Bible.  I had read and been taught this before:
Pro 1:1-7  The proverbs of Solomon the son of David, king of Israel: To know wisdom and instruction, To perceive the words of understanding, To receive the instruction of wisdom, Justice, judgment, and equity; To give prudence to the simple, To the young man knowledge and discretion — A wise man will hear and increase learning, And a man of understanding will attain wise counsel, To understand a proverb and an enigma, The words of the wise and their riddles. The fear of the LORD is the beginning of knowledge, But fools despise wisdom and instruction.

Knowledge of anything actually begins with the fear of the LORD.  I knew this instinctively as a believer but I failed to remember it in daily life.  As I went through my day I would vaguely realize that something I was thinking, doing, or experiencing was contrary to scripture.  I would neglect this thought and make a choice of what to do if what I wanted was contrary.

In doing this I was making whatever I chose to do an idol just as sure as if I bowed down before it and spread out my hands in worship.  I was actively choosing – as a believer- to worship and serve the creation instead of the Creator.

Now I get it.  True knowledge begins with the God of the Bible.  He has explained what I need to know there.  As I live my life I need to self consciously practice obedience when confronted with the issues that arise in my life.

How does this relate to massage and pain management?  As a massage therapist I look at the vast array of training and learning that I have available.  Almost all of them are built on foundations that deny the faith.  This can be difficult.

Imagine going to care givers that do not understand your faith and how it informs every area of your life.  We need to be strong in the LORD.  This happens by drawing near to God in His word the Bible.  It means we pray.  It means we apply God’s precepts to our lives.  No one can do this for us.  We must draw near.

Posted by christianpainmanagement.com at 12:26 PM No comments: